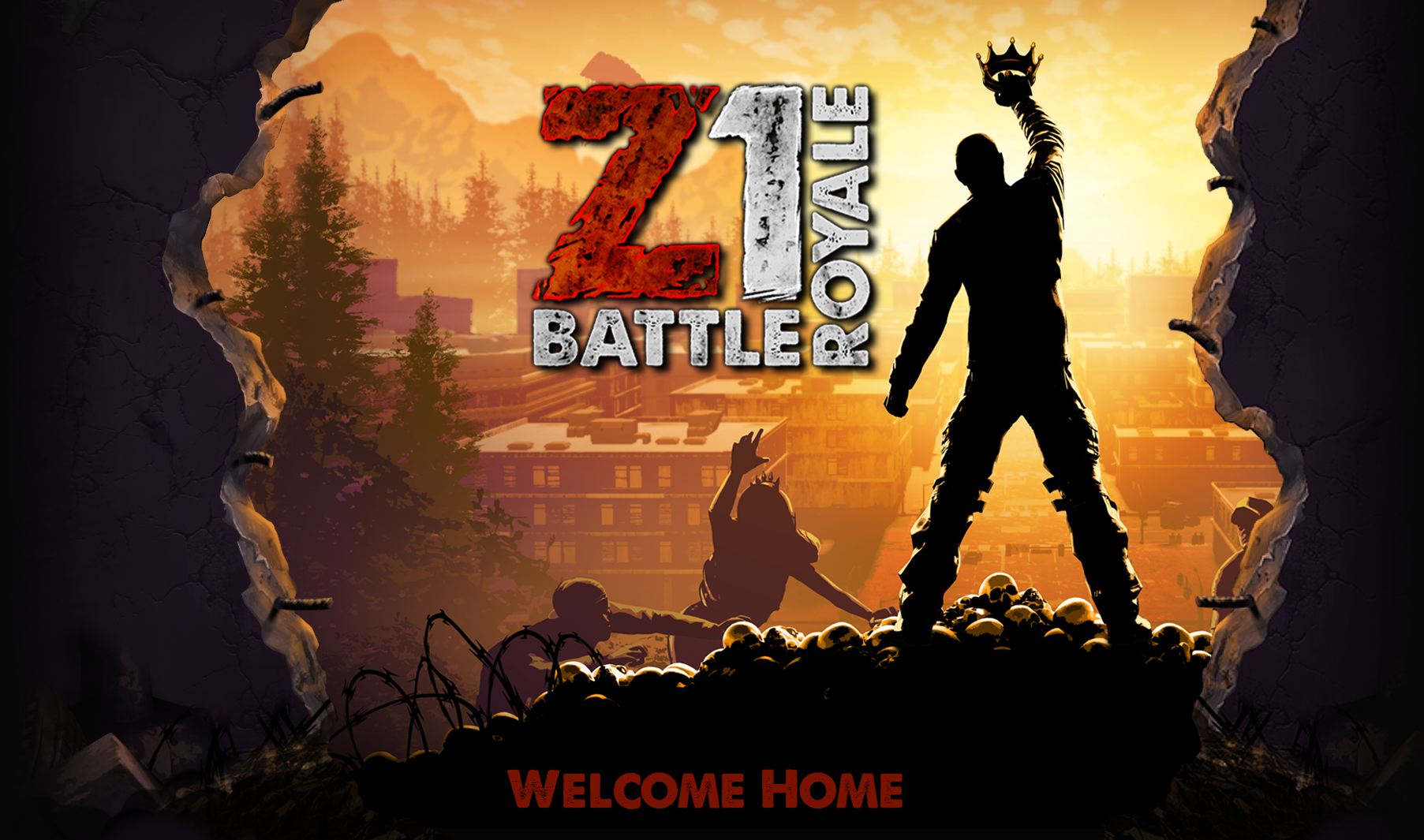 A foreword from our General Manager, Anthony Castoro.

"Today's patch is huge, not just because it contains tons of content, or that it's the start of the first new Season since early November, or even that the game now has a new name. It's also huge because it represents the first big delivery on the promise that the new NantG team made when it took over development last September: Bring back the game that so many of you fell in love with in the classic "King of the Kill" era around Preseason 3 at the end of 2016 and in early 2017.

Since September, the NantG team has been as transparent as possible about our goals and plans and many of you have stuck with us through the challenges of starting a new company, transferring the development and operations of a live game and releasing updates on an almost weekly basis. We want to take this opportunity to thank so many of you for sticking with us and to welcome those of you who are returning, or even just discovering the game for the first time.

We're not done! We still plan to address old weapon models, classic in-game UI elements and more. So if you want to keep up with the latest plans go to https://www.z1roadmap.com or join us in the official forums at https://forums.z1.live!"

Thank you Anthony. Today's patch is absolutely one of epic proportions as you will all soon see in the massive patch notes below. It has been a crazy ride since making the transition from player to Community Manager and I am ecstatic for you all to get to play this first giant step in the development of Z1 Battle Royale.

On behalf of the team I would just like to say "Welcome Home!"

User Interface - Rebrand
The first thing you see when you launch a game is the loading screens and the front end user interface. It is a massive point of nostalgia for players and we knew we had to get it in for this patch. Upon loading up after updating you will find a very new yet very familiar interface awaiting you. Our UI Programmer recreated the front end UI, menu system, kill feed, and players remain sections of the interface while giving it a bit of an update to accommodate new game systems that you will find out more about further down in the patch notes.

Another change you will notice is that the rebrand has occurred, and going forward the game has been renamed to Z1 Battle Royale on all platforms. Twitch, Steam, Twitter, and in game.

Along with the rebrand we have brought our new website and forums online. We will be using the forums as a place for players to hangout, discuss the game, conduct polls, and collect feedback from the community as a whole on the current state of the game, future updates, and test server patches. Feel free to hop into the conversations on http://Z1.live

Movement/Animations/Stances
One of the two biggest systems when it comes to the "feel" of a game's combat is the movement and animations. Since the combat update the game lost its arcade like feel due to changes to everything from movement speed to the animations system as a whole. Recapturing that arcade feel again was an absolute must.

Combat and Gun Mechanics
Since the NantG team took over on Z1 Battle Royale we have made multiple changes in previous patches related to gun mechanics and feel. All with one goal, bring back PS3 combat. Changes were made to internal systems and tools to rebuild the weapon mechanics of that season. Below is a list of all the changes that have occurred to the weapon mechanics since Season 2:

World and Environment Rework
Outside of gun mechanics and combat, another major player in the feel of the KotK era was the overall color palette, textures, and lighting of the world. These systems had major overhauls and changes to the tools that dictate how they interact with the world since that season. All of these were things that we had to track down, find out what changed, and fix or many times find new ways to recreate to make the game feel like itself again.

Changes made to the world/environment:

Vehicle Mechanics Tuning
Since Preseason 3 vehicles have had many aspects of their mechanics tuned and tweaked. We wanted to bring back the snappy and quick acceleration/handling from this era of the game. Here is a list of all changes to the vehicle handling that were made with this patch:

Missions
First up on the new feature list is the Missions system. Players will be given in match missions or "quests" as optional tasks to try and complete during a game. The challenges will show up as you are parachuting into the game and will expire at the end of the match. This system will have many different challenges that rotate and have different degrees of difficulty. Completing challenges will reward the player with credits, fragments, or crates depending on what difficulty the challenge completed was. You will be able to track these missions in a widget on the front end menu (pictured below).

Fragments
Next up on the docket is the Fragment system. As you compete in matches, you will be able to find fragments in defeated players loot bags. Whoever loots the fragment first will receive the credit, first come first serve, so make sure to check not only your own kills but others as well. There are 2 different color types of fragments, red and blue. Twenty blue fragments will net you 100 in game credits, while 5 red fragments will grant you a Conquest Crate. Blue fragments drop off every eliminated player, and red fragments will drop off of 1 out of every 20 players. Time to get looting.

Dailies
Another new system that you will also be able to track on the front end menu screen is the Daily/Weekly challenges. This is a new modified version of the challenges players were already familiar with. We have added a ton of new challenges to freshen things up a bit and give players more to do. Much like the missions and fragments these are optional systems that give out credit rewards along the way if you choose to complete them.

Hey I Know That Guy!
If you are big into the duos and squads you will notice your team mates now showing up in the front end menu with you. This is something the player base has been asking for and we knew we had to get this in. One thing to note is that your team leader will always be the center of attention front and center on the screen, with the rest of the team loading into the positions around them. 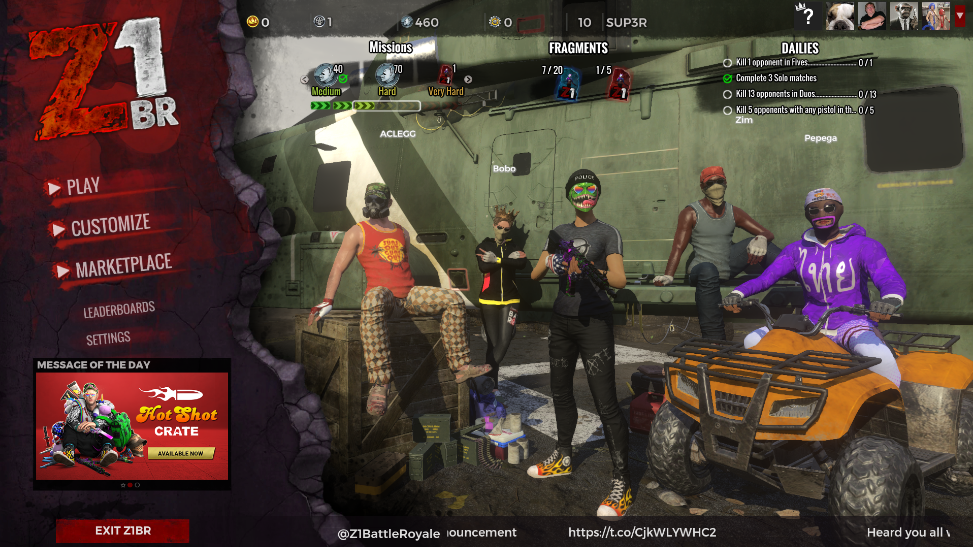 Note: Ranked Pro will be locked for the first 48 hours after release.